Taken by the Shadow | Book 4 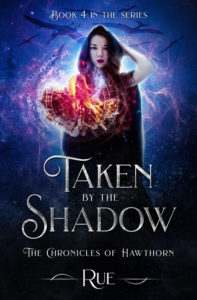 The Shadow Witch has finally won. Flynn Hawthorn, heir to the wand of the Coven of the Sacred Wood, has been Taken by the Shadow.

As the peace of Aotearoa is shattered by the evil seeping out of Dreamwood Forest and Magdelana continues her quest for power, Flynn remains a prisoner.Flynn’s magick is held in check by cruel iron bracelets and she is forced to choose between her love for her people and her constant craving for dark magick–knowing that her decision has the potential to change the future for the inhabitants of Aotearoa and Southeil.

Flynn has to make a decision: salvation or destruction.