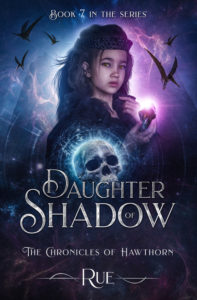 Conceived in magick. Born into deception. Roselle Katipo is no ordinary child.

The daughter of the Shadow Witch is missing and she has a powerful amulet in her possession. She continues to mature at an unnatural pace, but she becomes more animal than human as she hides among the massive Sky Shadows in their mountain enclave.

Several leagues to the north, Flynn Hawthorn fights to restore her reputation and reunite her family. But if she hopes for any chance at redemption she must forsake everything beyond the Mist.

Flynn, the child of prophecy, struggles toward the Light and yearns to heal her land.

Roselle surges toward darkness as she obsesses over unlocking the secrets of her own twisted magick, and awakening a terrifying threat.

Daughter of Shadow is the seventh book in the YA fantasy series The Chronicles of Hawthorn. If you like witches, ancient magick, and fast-paced adventure, then you’ll love Rue’s wickedly entertaining tale of dark vs. light.

Buy Daughter of Shadow and unlock the secrets of this magickal adventure today!